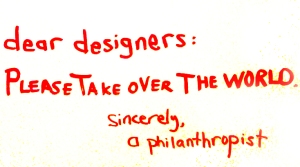 I want a near future where NGO’s, foundations, policy think tanks, philanthropists and social entrepreneurs are as likely to hire a phalanx of badass MFA designers to help them tackle complex social problems as they are to hire a phalanx of MBA grads. (I also wish the anthropologists would get in the game on a bigger scale, but that’s another post for another day.)

The private sector has done a very good job in recent years of “thought colonizing” the nonprofit sector. Some examples: the metrics obsession, venture philanthropy, microlending, social entrepreneurship B-school programs, MBA’s hired for top posts at some of the worlds most influential foundations, etc. Can the design sector mount an equally effective campaign to lend their skills to big social issues? Should they bother? What does the world stand to gain?

I submit for your consideration Exhibit A.

Last night I was invited to guest crit at Allan Chochinov’s “Design for Catastrophe” class at the School for Visual Arts. Their inquiry:

When global disasters happen, how can we use design
to solve for mutual understanding
in emergency environments?

In Allan’s class the students are tackling big, messy problems  like government failures post-Katrina, functional illiteracy in Detroit, increasing student suicide rates in Japan, sex tourism in Malaysia, the role of the Mafia in environmental damage in Italy, etc.

Because I’ve worked in international philanthropy and NGO-land for many years, the issues aren’t new. What inspired me last night was seeing how students at SVA are using what Allan calls their “design superpowers” to uncover the power dynamics and system complexity contributing to these seemingly intractable challenges.

Allan is leading the charge of training the NextGen design students to think beyond becoming better photoshoppers, making a better razor, writing cooler code or even designing a better refugee camp tent.  He’s reminding them: you have many strategic superpowers — know them, practice them, use them for the forces of good!

Best of luck to you Allan, and your awesome students (thanks guys!) in taking the lead in designing for a new future — human scale, global scale.

I know I’m being a bit polemical in this post. At the end of the day, my dream isn’t about inciting a hiring war between MFA’s and MBA’s — both kinds of training can be incredibly useful in different contexts and addressing different aspects of really messy global problems. I just want to see more macro-level diversity in the *kind* of strategic thinking and analysis available to those in the nonprofit, policy making, and social engineering space.  MBA memes are taking over the world — will the MFA’s please stand up?

What if the interface for saving the world
was as beautiful as an IPhone?

What if philanthropy understood and served human beings
as gracefully as a Hans Wegner chair? 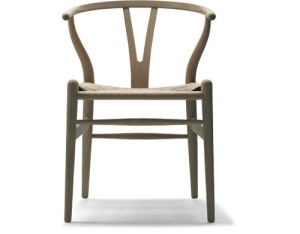 People who are on it:

One response to “Lightbulb: Design for Complete World Domination”

I stash ideas here about dreamers and thinkers and makers and doers and the spirit of "philanthropos" moving us all forward.